Hey there everyone, Ryan here! This year has been an absolute wildcard for card games, but the new Saga Cluster is bringing back some strong memories of older Force of Will formats that has quickly reignited my passion for the game.

We’ve seen some strong, clearly defined archetypes, but also a lot of other promising cards that can take original builds to a competitive level. As an avid lover of deckbuilding, I’m hoping that this set really allows for some level of creativity, especially when the last 2 years of Rune or Regalia mechanics have felt extremely linear compared to the days of old.

To begin, I’ve taken a look at the entirety of Epic of the Dragon Lord, but I’ve absolutely no experience playing the Alice Origin cluster-only format, and haven’t played a single game with any of this new set. This article will be an EXTREMELY raw take, as I dive into my thoughts on what I think the best generic card in each attribute will shape out to be.

Rating cards that are archetype-specific tend to be very hit or miss based on how well the archetypes end up actually being, which can be very difficult to predict so early on in a new set. These cards should not only very easily see play in decks outside of the attribute they were designed for, but I would expect them to constantly pop up (if not be downright problematic) as our decks evolve over the next few sets. Flute, Captive Dragonoid Child // Group of Comets (EDL-004)
White easily has the most options to choose from when it comes to finding cards that can play outside of the [+100/+100] gimmick, but the card that actually stands out to me the most here is Flute, Captive Dragonoid Child. The Barrier keyword is massive here, as removal in Force of Will right now is easier to access than ever before. But as the game picks up in speed, it also means that decks need to proactively be able to get ahead of their opponent’s in resources as quickly as possible, to begin snowballing their lead.

Nothing does that better than ramping on turn 1. If this card was simply an Acolyte of the Sun (SDV1-001) reprint with Barrier, I would be completely satisfied to call this playable, but it goes above and beyond. The part of Flute herself that leans into the [+100/+100] mechanic is exceptionally useful even when your deck isn’t built around it, as many other splashable cards look for it – Exorcist Mage at the Academy (EDL-003) comes to mind, as well as Ominous Moon, the Lunar Sword (EDL-089).

Starlit Canopy (EDL-016) isn’t terrible removal to play, strictly speaking, and absolutely loves the consistent card draw that comes from Flute as a sort of mini engine, even when not playing Oborozuki, Star Sword Visionary (EDL-009).
Group of Comets (EDL-004) isn’t a card that would see inclusion on it’s own, but it can be useful in some scenarios, and it’s never a bad thing for an already useful card to have even more options. Hoelle Pig // Food Supply (EDL-028)
Red has probably the least impressive options for off-color splashing, but I think the clearest winner would be Hoelle Pig.
Food Supply will largely be irrelevant here, although the fact that it draws a card allows you to effectively cycle it away in late-game situations, should the need arise. Hoelle Pig should help facilitate some of the aggressive Regalia decks, most notably Melgis (SDAO1-028) // Melgis [J-ruler] (SDAO1-028J), to find more power in a single turn as they call a stone and do Judgment.

A close runner-up for red would be Claw of the Dragonoid (EDL-023), as Selesta, Treasure Hunter (EDL-050) // Selesta, Treasure Hunter [J-Ruler] (EDL-050J) will likely abuse it despite being a non-red deck, but we don’t do cop-outs here. Despite the welcome addition of Pierce, Melgis would likely not be able to find room for Claw as easily as Hoelle Pig, and future rulers with tap abilities may enjoy Hoelle Pig as well. 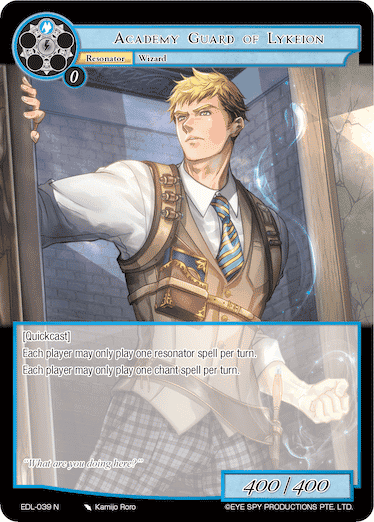 This can be especially good against the OTK combos that exist in the format, or the general gameplay pattern of Welser, the Progenitor of Magic (EDL-074) // Welser, the Progenitor of Magic [J-Ruler] (EDL-074J). While I’m not as thrilled about this card as I am for some of the other options on this list, I think he has the biggest chance of making a sideboard splash throughout the format. Altesing’s Secret Hideout (EDL-059)
If I haven’t made it clear yet, I think removal is more effective than ever thanks to Epic of the Dragon Lord, and playing any resonator that costs more than even 1 mana should have some significant impact on the game even if the resonator doesn’t stick around to the board. There’s an entire recursive argument of “Removal is too good, don’t rely on resonators” – “No one is playing resonators, don’t play removal” – “No one is playing removal, play big resonators” that can really mess up tournament preparation when you get too big brain for the rest of the room. Altesing’s Secret Hideout helps cut straight through the triangle and lets you play a resonator deck if your heart desires. Depending on where the format is at, can almost completely invalidate a sizeable chunk of your opponent’s deck if they can’t find their limited addition removal.

Should Welser, or at least Altesing, Mischievous Boy // A Glimpse of the Prodigy (EDL-058) see some play, this card only gets even better, but as with every card on this list so far, the primary use case more than justifies its inclusion. While this card will be nearly mandatory for slower decks to beat Lilias, those same decks will have no qualms about playing this card in other matchups, something that couldn’t be said for its legacy counterpart, Black Moonbeam (BFA-061). Because Ominous Moon can hit resonators as well, it won’t be completely dead in matchups that don’t focus on J-Rulers, which was the problem that maindeck Black Moonbeam suffered in the past. As J-Ruler decks will be a constant mainstay in Force of Will for the foreseeable future, I think Ominous Moon, the Lunar Sword will see constant play in a variety of decks.

Over the next few weeks, while I dive into the set in full and take a look at what the format will look like in earnest, I’m excited to see where these early predictions play out. If you still prefer the simple and upfront power of Regalia over the complex new mechanics of Selesta and the like, give some of these cards a chance in your old decks! My insights on the upcoming format
Force of Will – Ramp