It is very clear now to people that Rezzard (AO3-BaB-3) // Rezzard [J-ruler] (AO3-BaB-3J) is the best deck of the format. Either the easy-to-use, yet powerful Dreams Rezzard deck we saw last week, or the more midrange-oriented lists using Abhorrent Revival (EDL-077) and strong, cheap strangers to create massive leads in the midgame. Both are powerhouses that no other deck can reasonably defeat. This has led to a lot of frustration in the community, as it stops creativity.

Today I want to present you with an alternative. A deck that can hold on its own against Rezzard while also not faltering against other decks. On top of that, it is even a waifu. What else could you want from a deck?

The deck in question is Dark Alice (AO4-Buy-a-Box-2) // Dark Alice [J-ruler] (AO4-Buy-a-Box-2J) and the impressive things you can do with all the crystals she generates. The subsequent sections are the pros and cons of the deck, an in-depth decklist, and your goals when playing the deck.

More Will is good, especially if you get other effects on top of that. Unknown Mother Goose (PofA-115)
It is your Rulers Regalia, it creates a lot of crystals due to Dark Alice’s ability when played and an additional one at each end of your turn. It also creates two Will that can be used on more than half of the deck. Without this you just lose. Yggdrasil, Heroic Spirit of the World Tree (PofA-121)
It finds your Unknown Mother Goose and helps pay for it. In plenty of occasions this is your turn one play. Flute, Captive Dragonoid Child // Group of Comets (EDL-004)
She is here for her resonator half; I have never used the board wipe chant in all of my testing. She is a Will dork in your main colour with barrier. Use your quickcast one-cost resonators to protect her from Tsuiya, Cursed Spawn of the Star // Curse of Ragnarok (EDL-094)´s resonator enter effect.

So far we don’t even know why we play all these crystal generating cards and effects. Well, here is why. One Pair (PofA-066)
One Will for four to eight crystals is just too good of a trade. You need a lot of crystals and this is one of the ways to get there. Schrödinger (PofA-105)
This gloomy-looking cat is insane. Why can’t everyone just play a win condition that can hardly be interacted with, provides optional life gain, protecting the regalia from being targeted and creating more crystals while doing so? Well, not everyone can, but Dark Alice sure does. Jeanne d’Arc, Heroine of Shadow (PofA-059)
Generating two gems while digging for your best three cards in your deck is just good. Not much else to say. Three of a Kind (PofA-011)
One Will draw three cards? Count me in. Use this either to draw three cards or to use unspent Will before recovering in the early turns, depending on your hand. Shadow X (PofA-073)
If you ever run more than one copy, you are doing it wrong. That one copy, however, is fundamental. Being able to burn your opponent out of nowhere is incredibly useful. Especially since she can be summoned from the deck by Dark Alice’s J-Ruler enter effect and recycled from the grave using her God´s Art. Always use the effects one at a time to burn your opponent so they cannot chase healing or damage prevention to get around more than two damage. Shadow Swordsmaster (PofA-106)
Last but certainly not least. She and Schrödinger keep the deck together. A two-Will board wipe that draws you a new hand? Yes, please. No amount of words could describe just how insane this card is for Dark Alice.

Aside from Shadow Swordsmaster, we cannot really interact with our opponent’s game plan yet. The last few cards are dedicated to doing exactly that. If you want to make big changes to the decklist, here is where you can. 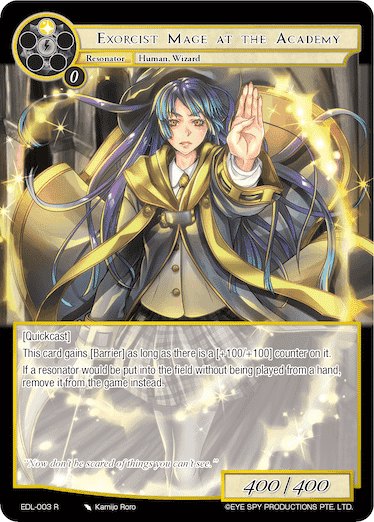 Exorcist Mage at the Academy (EDL-003)
Amazing Floodgate that we ourselves do not really care about. Chase Rezzard’s Mikage Seijuro’s Game of Dreams (AO3-075) with this card to ruin their day. Mourning Angel (AO3-013)
This may be the most debatable card on the list. It is another way to interact with Rezzard Dreams’ game plan, that is unless they have The Road to the Undead Lord (PofA-075) in play. Interacting with graveyards is surprisingly useful. Or just use her in response to banishing effects like Tsuiyas and get rid of her instead of relevant cards.

Just eight dual stones for the two colours we play and two mono-white stones. Our preferred turn one plays are Yggdrasil and Flute. One does not care about the colour, and the other requires white. The 2,2% chance to hit both white stones leads to quick losses more often than not, but that´s still better than opening mono black on turn one 10% of games.

Sounds easy enough? There are a few things to handle to get there. First and foremost, the crystals. You want to draw as many cards as possible using Swordsmaster and Three of a Kind but also never want to run out of crystals to play Swordsmaster for two Will or turn Schrödinger into a 10/10 drain/eternal. Balancing that takes a bit of practice, but it should be pretty much straightforward once you got used to it.

The other issue, however, is a lot worse: drawing only cards that generate or use crystals without finding the other half. Unknown mother Goose is an extremely important card. Despite this, if you only draw Goose, One Pair and/or interaction/ramp cards, you will not have a good time. Take a bit of time to figure out your mulligan strategy and play lines. What you do on turn one and two very much impacts your turn three and four options. Start by creating more darkness crystals than light crystals once you plan to set up a potential Shadow X burn.

Exorcist Mage applies to both players. Do not use your Schrödinger on a resonator if you control her. Also, you cannot summon Shadow X from the deck using Judgement while she is in play.

Once you have a Swordmaster in play but you have not drawn any draw engines, you may use Schrödinger on said Swordsmaster to use more light crystals for extra draw. It also allows you to banish your opponent’s board at the end of their turn to set up for a big push.

Against Dreams Rezzard, and if you have a Swordsmaster in the graveyard, try to bank a lot of darkness crystals. If your opponent plays Dreams, use Swordsmaster to banish all the resonators they just summoned. Your board will die too due to their Hino Kagutsuchino Mikoto, the Flaming God of Fate (Stranger) (PofA-022), but at least they cannot attack you for lethal damage.

One or two Schrödinger are usually enough to win the game in the long run. If your opponent uses removal specific to additions or non-resonator cards (such as Ragnarok, Invading Dragon Lord (EDL-096)´s ability to remove all of them), then turn the cat into a resonator. It is now unaffected by those types of removal. You can even use another Schrödinger to flicker the original target now, if it was a targeting removal which doesn’t destroy. If used properly, these cats will end the game or generate bigger and bigger leads every round. You may also remove a darkness and a light crystal to turn it into a 10/10 drain/eternal/precision/bane resonator to generate advantage. You have the crystals to do so. If the game calls for it, invest them.

All in all, this is a deck that both surprised me with its viability, as well as with the different kind of gameplay it offers. It is fun once you learn about crystal management. For sideboard options, I purposefully haven’t told you what to play. It is just cards that you bring for the Exorcist Mages and Morning Angels.

Some suggestions would be Tsuiya, Cursed Spawn of the Star // Curse of Ragnarok (EDL-094), Mage Jack (PofA-004), Schrödinger’s Cry (PofA-007), Dark Alice’s Smile (PofA-052), Mikage Reiya (AO3-046) (to toss Swordsmaster to the graveyard against the Rezzard Dreams decks) or Pier, the Godspeed Archer (AO3-014). All of these may also be used in the main deck instead of the two interactive cards I used. There are a few more, so this is where you can get creative. If you are bored of Rezzard beating you in the OLS or still looking for something fun to play at the online tournament next month, then I would recommend you give this deck a try.