After a very depressing “Rezzard or bust” meta where our Undead Lord (Rezzard (AO3-BaB-3) // Rezzard [J-ruler] (AO3-BaB-3J)) reigned supreme as Tier 0 deck, we were all silently hoping if the new Six Sages rulers were able to stir up the meta… and oh boy, they do not disappoint!

Today we will be focussing on YABGD (Yet Another Black Green Deck), this time in the form of Fiethsing (MSW-053) // Fiethsing [J-ruler] (MSW-053J) and Grusbalesta (MSW-073) // Grusbalesta [J-ruler] (MSW-073J). This deck truly is a love story a first sight, since it was clear after the first spoilers that both rulers were one of the best out of the seven we got with the new set.

While Fiethsing allows us to sculpt our hand the way we want (and providing an almost uncounterable cancel with her judgment), Grusbalesta nets us perfect will on the first turn each and every game with The Magic Stone of the Six Sages (MSW-102). This combination of “perfect hand meets perfect will” is a combo-control player’s dream come true.

Before we discuss the individual cards and interactions, first let’s have a look at the decklist itself:

Goal of the Deck

As with a lot of Black Green decks nowadays, the main goal is to abuse Sigurd, the Covenant King (AO3-082).
Here we simply want to put four Schrödinger (PofA-105) into play on turn one and then cast One Pair (PofA-066) on turn two to transform them into 1000/1000 resonators with a combination of 2x Schrödinger with Drain+Eternal and 2x Schrödinger with Bane+Precision.

This should be sufficient to win against most decks, especially with the buff Magic Stone Research Institute (MSW-087) provides to our resonators (which should realistically be +400/+400 most of the time when we attack on turn two).

Next to the obvious Sigurd / Schrödinger / One Pair combo (which will be explained below), we play a full set of both cancel and discard spells in the form of 4x Faurecia’s Journey (AO3-035) and 4x Dark Alice’s Smile (PofA-052). Since having more will available to us than our opponent is going to help us immensly (especially in some Six Sages matchups), we also play 3x Genesis (PofA-120).

This regalia will come into play rested and thus unusable the turn it comes into play. However, it can pay for both Faurecia’s Journey and Dark Alice’s Smile (since they are both Mage Arts). Hence, it allows us to tap out completely with our Stones and still have another play available thanks to Genesis. Another nice plus is being able to use Genesis as fodder when our opponent was able to resolve a Tsuiya, Cursed Spawn of the Star // Curse of Ragnarok (EDL-094), thus preventing the creation of any +100/+100 counters.

One final thing to note is that Genesis will also help us play Release (AO3-016), which will be discussed later when we look at some card interactions.

So how are we able to do all this on turn one? This is where The Awakening of Fiethsing (MSW-060) is going to help us out. Thanks to Fiethsing’s ruler ability “{Rest}: Produce {1} . Spend this will only to play chants.” we are able to: Neverend, Fairy Tale Dragon (MSW-043)
Since a resolved Sigurd alone will put 7 cards into play (Sigurd itself, 4x Schrödinger, 1x Magic Stone Research Institute and 1x Magic Stone) and one Magic Stone in grave, we only need two more cards in total (which includes Neverend) to make it a 1500/1500 Flying beatdown stick. This will be our alternative way to win the game, i.e. beating down our opponent with cute “little” Fairy Tale dragons. The Awakening of Fiethsing (MSW-060)
One of the most important cards in our deck. Not only does this card provide all the Sigurd shenanigans on turn one, but it also fetches Neverminds out of our deck (theoretically, it only costs just one Green will to put two Dragons into play). Welser, Master of the Six Sages // His Last Lecture (MSW-064)
One of the best cards ever printed in Force of Will. Nothing more to add here. Optical Camouflage (GITS2045SD-008)
This card not only bounces potential blockers back to our opponent’s hand, but (even more importantly) also bounces our own Welser back to hand in order to have a cancel available when needed. 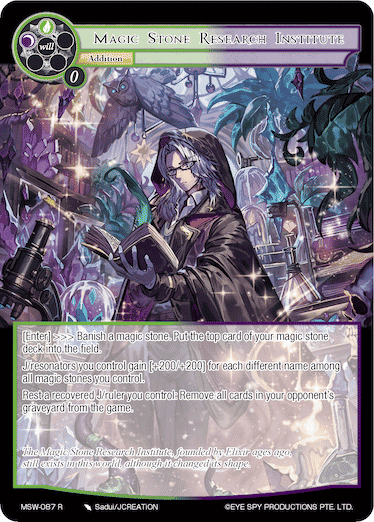 Magic Stone Research Institute (MSW-087)
One of the top2 cards from MSW, only to be surpassed by the new Six Sages stone. Not only does this card buff your field enormously (+800/+800 is not uncommon), but is also just wrecks all graveyard based decks (hi Rezzard! 😉)

While we already explained most card interactions, there is an important one remaining which we haven’t discussed yet: