Hello there, it´s time to take a look at another format and I´m here to share my opinion what the upcoming months have in store for us. I will look at the past of the format and how it has been impacted by the new cards as well as other strategies. Both from the new set as well as old ones that were overshadowed by Rezzard (AO3-BaB-3) // Rezzard [J-ruler] (AO3-BaB-3J) and the oppressive things he could do.

For the last couple of months Rezzard was the only deck reasonably viable at the highest level of play. He was nearly unbeatable due to the massive amounts of resources he could both generate and store in his graveyard. The problem was we had no way to interact with his game plan. The release of Magic Stone Research Institute (MSW-087) changed this in a major way. We no longer have to endure Rezzard doing whatever he wants.  As a result, it will be a fall from grave for him, leaving him as a shadow of his former self.

Ragnarok, Invading Dragon Lord (EDL-096) was the only deck that could hope to compete with Rezzard, but with Rezzard’s departure from the top spot, we will have see if Ragnarok can find a new identity in the format. The last one I would like to mention is Selesta, Treasure Hunter (EDL-050) // Selesta, Treasure Hunter [J-Ruler] (EDL-050J), who was a very promising deck that was kept out by Athenia, the Wind Master (Stranger) (AO2-024) which was found as a two-of in every Rezzard deck.

People quickly figured out some strong early-game strategies, whether it’s Wolfgang, Exiled Demon Prince (MSW-097) and the Shub-Niggurath, Gatekeeper of Outer World (MSW-092) combo to deal 66 Damage or The Awakening of Fiethsing (MSW-060) to find Sigurd, the Covenant King (AO3-082) on turn 1 and then using him to play 4 copies of Schrödinger (PofA-105) and ending on a Magic Stone Research Institute (MSW-087) as well as a recovered magic stone for interaction on your opponent’s turn (editor’s note: see Fiethsing & Grusbalesta – A Love Story).

Even Welser, the Progenitor of Magic (EDL-074) // Welser, the Progenitor of Magic [J-Ruler] (EDL-074J) with a deck containing mostly Infinite Matchsticks (MSW-025) and burning your opponent dead by turn two is an option. However, most of these decks cannot even hope to compete with Almerius (MSW-002) // Almerius [J-ruler] (MSW-002J) who has an insane judgment target into The Final Stance (PofA-111) that can be sent to graveyard by Mikage Reiya (AO3-046). She is also giving you an extra 30 Life to work with, invalidating most of the other strategies mentioned above.

Key cards of the new set: 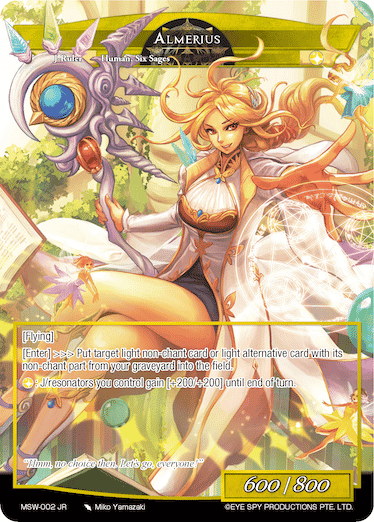 Almerius (MSW-002) // Almerius [J-ruler] (MSW-002J)
The already mentioned Almerius stops most attempts to end the game quickly while also being a massive threat herself. Taking just a single extra turn is game-winning when used properly and even the ability to give +2/+2 is very useful, as it makes your Resonators potentially bigger than your opponent’s, as well as dodge a few damage based removal options. Magic Stone Research Institute (MSW-087)
A card that gives access to grave-hate and a massive buff to your board for a mere one will (it costs two, but refunds one of it) is impressive. Furthermore, the card is a target for Sigurd. With Almerius being reliant on her Graveyard for her Judgement as well as this card’s standalone strength, paired with its searchability, other graveyard-based strategies will not have a good time in the upcoming format. The Magic Stone of the Six Sages (MSW-102)
A Magic Stone that gives every deck access to every color at close to no cost. This is in my opinion the best card in this game’s history and it will affect the format. Being able to play any tech-card you choose because will color is not an issue anymore, is important to notice when choosing your deck as well as your sideboard. 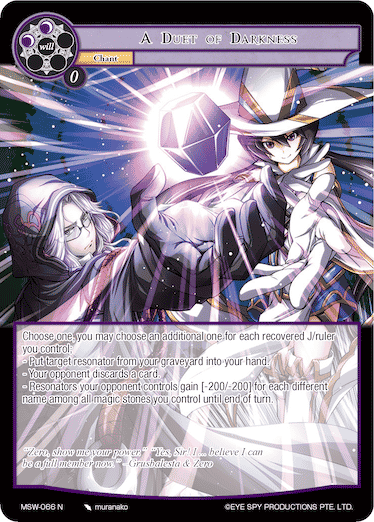 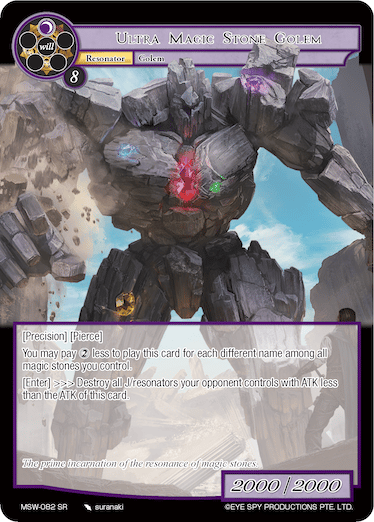 A Duet of Darkness (MSW-066) and Ultra Magic Stone Golem (MSW-082)
One sided board wipes are always a strong option, especially if they aren´t useless if your opponent doesn’t have a board to wipe. Both of these cards are good even without your opponent having a few Resonators to destroy. But if they do, these cards become insane. The existence of them stops “go wide” strategies from even attempting to be relevant.

So, what will the actual format look like? Well, if you can’t play Burn or Combo strategies, cannot really play for tempo or controlling a big board, then it only leaves us with a rather slow, control-oriented format. We also still need to find out where the Six Sages will fit into the format. To make it short, they are extremely powerful (some more than others) and will be a central part of the format. Wolfgang will also be somewhat relevant, at least in a more casual environment and cannot be ignored when you try to play something other than Almerius.

First off, we have what I perceive to be the best deck of the upcoming format. It’s just all the powerful cards shoved into one deck. It’s consistent, powerful and has very few weaknesses.

Next up we have the burn deck that actually has enough power to go through 70 health in a reasonable timeframe. It has two strong J-Rulers with Swiftness, extra cards from Moojdart (MSW-042) // Moojdart [J-ruler] (MSW-042J) and enough free burn spells to finish the game by turn 3. Even against Almerius.

Wolfgang and the Shub-Niggurath combo is still extremely potent when paired with almost all the discard options available in the game. Just take away everything your opponent could have to stop you and then kill him.

This one might be wishful thinking by me, but the only reason she was not the powerhouse she could´ve been last format was Rezzard and the ever-present Athenia. Now that they’re gone, she might have another shot at competing with the very best …