Hi all, last weekend Jef organized a French Wanderer format “Ultime Players Tournament” on Untap.
I participated as the only German player with the following Milest & Fiethsing aggro/combo deck:

The deck had 57 cards because I was thinking about what to expect and besides my main combo of Rukh Egg (TMS-029) and Cthugha, the Living Flame (MOA-013), I wanted to play some other control cards and I’m very bad at deck cutting and trust in my luck 😆.

I took Fiethsing because the ability to mulligan 3 times is incredibly strong. Another reason why I also took her, is that she allows me to play my main combo very well on turn 1 with the card The Awakening of Fiethsing (MSW-060). The trick is that I “combo off” on turn 1 regardless of which stone I hit, and works going either first or second (with energize). 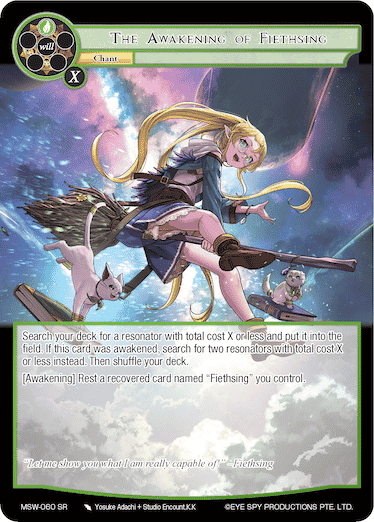 First you call a stone with Milest, and if the stone is a The Magic Stone of the Six Sages (MSW-102), you can even rest Fiethsing for one extra void will before recovering Fiethsing with the Six Sages stone again. With the will from Milest and Magic Stone (or extra void will from Fiethsing) you now cast an awakened The Awakening of Fiethsing to search for two Rukh Egg (TMS-029) and put them into the field. Then you sacrifice one of the eggs for Cthugha, the Living Flame (MOA-013) (so you need to have a Cthugha in hand) and search for another Cthugha thanks to the effect of the egg, sacrificing the other egg and grabbing yet another Cthugha (or another red resonator you need).

Then, if you still have a red will available, you cast Shrine of the Dragonoids (EDL-035) to deal 200 more damage for each of your red sources until end of turn and then attack with both Cthughas, which in the optimal case can deal 2800 damage on turn 1 with 4 Cthughas and a Shrine. Then next round you try to attack again, while dealing 200 chip damage with Milest (or 400 with Shrine) to slowly burn the opponent. Another combo that is also very important against other aggro/burn decks is getting Guardian Wizard (MSW-005) + Light Servant of Ragnarok (EDL-006) + Neverend, Fairy Tale Dragon (MSW-043) in play, because with them you get no more damage in the optimal case. With Almerius (MSW-002) // Almerius [J-ruler] (MSW-002J) in the sideboard you have a good possibility to survive a bit longer against aggro/burn decks and you’ll also be able to revive the Light Servant or Guardian Wizard in case of emergency.

Princess Kaguya // Flying Bamboo (MSW-008) is in the deck because it gives you extra mana, can replace your ruler in a pinch if you need it, and can also get big very quickly herself (due to the moon will) and can pound the opponent for a lot of damage. The Ouroboros, the Reincarnating Light Serpent (AO1-010) in the sideboard together with Resistance of the Twelve Protective Deities (AO3-078) is good to bring the opponent down to 2000 quickly and to defeat the opponent faster with your Burn/Aggro cards. With Caduceus (AO1-050) you have a good possibility to get Resistance back into your hand and, if necessary, filter your deck for certain cards.

Arle, the Seven-Tailed Fox // Arle’s Flame (EDL-020) has also been important in the deck, because it can keep coming back due to its effect, do a lot of damage to an opponent’s resonator and also redirect the block or attack damage Arle gets to the opponent.

Faurecia, the Virtuous Vampire (AO3-067) would only be good against heavy control decks that work a lot with targeting effects in the sideboard.

Thank you for your attention and I would like to thank Jef for such a great tournament weekend, testing my skills with good players and playing with them! I would also like to thank Dennis for giving me the opportunity to write something about my deck.