It’s been a while since we posted an update of the Wanderer banlist. There is not much to be said though, because this year has been bad for everyone due to Covid. At the committee we have a simple (but important) rule: we only update the banlist after getting a large amount of tournament results from all over the world.

With this in mind, and knowing that in the past nine months almost no one played in physical events, this update might not surprise you:

However, this does not mean that we don’t have cards on the watchlist, and even more after the release of The Magic Stone War – Zero, which has drastically changed the pace of the game. Let me talk about the cards we have on the watchlist: 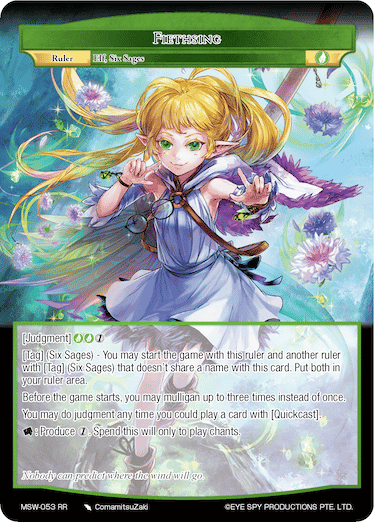 Fiethsing has joined the game being the most powerful and versatile ruler since Speaker of Eternal Night (TSW-109) // Scheherazade of the Catastrophic Nights (TSW-109J). Her ability of producing 1 colorless will for chants allows for early gameplays which end up being a 2×1, or 3×1, or even a huge 4×1. She has also become the ruler to play in Aggro, Combo and Control due to her ability of providing multiple mulligans. Even if you decide not to tag her with another Six Sages ruler, she is a standalone powerhouse. We will watch her closely, since we don’t want another ruler that becomes 50% of the metagame or higher. This addition might be the most underrated card from EDL. In Wanderer, due to the large amount of zero cost cards, it can be played on turn 1 and lets us play our whole deck for free (because almost every Wanderer legal competitive card costs 2 or less). We have banned almost every OP zero cost card, and this turning everything into a zero cost card makes us like it the same amount, which is zero. Ah, here we go again. We have seen this card breaking NF for the last 9 months, and afer MSW this doesn’t seem to be changing. Sigurd becomes better and better as more darkness additions appear in the game, which leads to powerful boardgame states in the early turns of the game. Right now Sigurd is still “slow” in Wanderer terms, but he might become a problem in the future. We’re watching you closely, Sigurd! Our friendship might end too, as yours with Rezzard (AO3-BaB-3) // Rezzard [J-ruler] (AO3-BaB-3J).

And that’s all for today. We would like to ask you a favor. We need to gather Wanderer tournament results from all over the world. In order to do this, we would like to receive the Ruler breakdown of the events you play, even if those events are small. Every piece of data we can gather counts. So please, use the comments section of this article or send us a message every time you play a Wanderer tournament. That would help a lot 😊.

See you soon and stay safe!