As we mentioned in our original post about the Genesis format, we decided to start with an almost empty banlist in which only Ayu, Lunar Swordswoman (ADK-060) // Ayu, Shaman Swordswoman (ADK-060J) and Ragnarok, Invading Dragon Lord (EDL-096) were banned …

… until Lars Grams (Pl0x on Discord), broke the format 😂

Before we discuss the changes to our orginal banlist, let us have a look at his deck which led us to make these changes:

So what does this deck do exactly?

The reason why we decided to publish our banlists, is because of the following combo:

Now that was fun and interactive, wasn’t it?

The new banlists and our reasoning behind them

Do check out the underscored “s” character, because this is an important change to our original banlist.
From now on, there will be two banlists; one for the main deck, and one for the additional deck.

This way we are able to keep certain cards in-check when they get out of control, without having to ban them immediately.

These are the changes which will take effect on Sunday, April 18th, 2021: 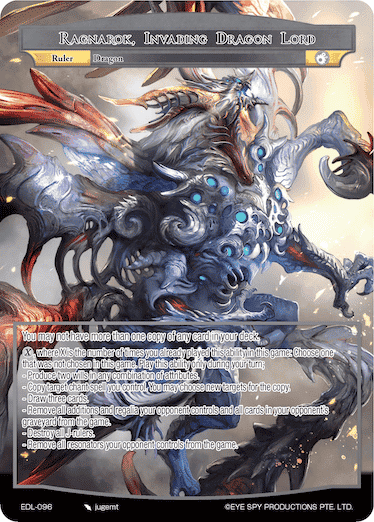 This means that although Invitation to Purgatory (DBV-079) is banned from the Rune Deck, you are still allowed to play it in your main deck since the card is a Chant/Rune.

Why did Umr get banned?

TLDR: Umr-At-Tawil (ENW-051) is just too strong for the format once it resolves.

Even though banning Umr seems to be the most logical solution, we also discussed the following cards as well:

Demonic Dead (ENW-074) seems degenerate, but even without this card the combo can be pulled off rather easily, thanks to Oath of Dead (1-182), a forgotten card from the original Valhalla cluster (which wasn’t played by Lars).

The other two cards Sacrificial Altar (AOA-100) and Sigurd, the Covenant King (AO3-082), although extremely powerful, do allow for more interesting playlines and as such didn’t need to be banned.

Even though Umr-At-Tawil (ENW-051) is now gone from the format, this doesn’t mean that it will never be allowed to return.
We will keep monitoring all Genesis tournaments to see if there are any cards breaking the format, or even cards entering the format which could potentially nullify cards which are on our banlists.

Until then have fun with our rebooted Genesis format! Falling Into a New Format