First of all I would like to thank Dennis and Fowlibrary for letting me write this article, then I would also like to thank Eunji for hosting the Singapore event. Without further ado, let’s go straight to the deck analysis.

I chose this deck because I like to play “simple” decks. My playstyle is fast OTKs and since I am used to playing one- and two-offs or at first glance “inconsistent” decks, the disadvantages of Asmodeus (TST-044) and Carlina (TST-075) are not really an obstacle for me. My favorite combo is a turn 1 kill with the will of Carlina and then with the will from a Magic Stone to play the card Swarming Cthulhu (TST-020) and then use Asmodeus [J-Ruler] (TST-044J) God’s Art, hitting 7 different cards while also hitting a Castle of Asmodeus (TST-051) to attack on turn one for 4k. Otherwise just use Asmodeus’ God’s Art to quickly overrun the opponent by beating them down with your buffed resonators.

Another combo in the deck uses Wall of Terror (TST-033), The Mimicking Beast (TST-091), Avenger of Amadeus (ADW-047) and Asmodeus’ Demon (TST-045). The idea is to to get as many [+100/+100] counters as possible on Asmodeus’ Demon and then OTK’ing the opponent (editor’s note: also see Lars Grams’ Deck Tech Series – “Falling Into a New Format”, which also explains this combo in-depth).

The Castle of Beatrice (TST-078) is for the long, grindy games, while also being a very good card in the mid- and late game. Faurecia, Lady in Attoractia (ROL-016) has also been very valuable, due to having quickcast and being able to give a resonator barrier once per turn in order to keep it stick to the board. Finally, Vergilius, Rebel against Satan (TST-063) just wins games by itself. I even maindecked some cards to combat specific decks, for example Attendant of Asmodeus (TST-035) against the Order Ruler Kaguya, God of Cats and the Moon (GOG-078) // Order of the Moon (GOG-078J).

Oh as a little epilogue, why I didn’t play any cards from the newest cluster is because I didn’t own any of them during that time. However, cards you could add from the new cluster to give the deck a boost include: 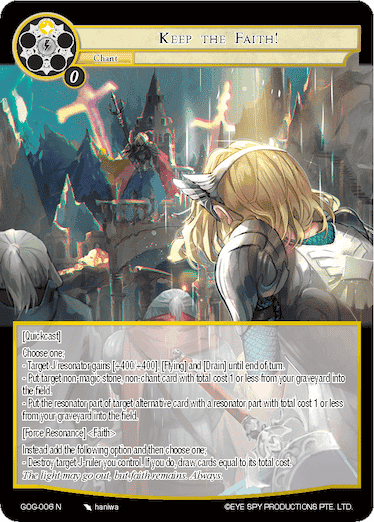 Keep the Faith! (GOG-006), simply because the deck plays a lot of one-cost cards which can be put into the field from your graveyard at quickcast speed. Also, having [+400/+400], Flying and Drain is often game deciding. Artillerist of Faith (GOG-001) is especially good against Belial (TST-073) // Belial [J-Ruler] (TST-073J) matchups, because if you discard a card (for example discarding an Avenger of Amadeus (ADW-047) to do 2000 damage and then drawing another card) and Belial doesn’t decide to use its God’s Art, you can quickly kill him with it. You can even force Belial to use his God’s Art, even if you don’t discard anything. Due to drawing another card when using the card’s effect, its downside is neglectable. Calamity Shield (GOG-072) is another good card, for example in the already bad matchup against Violet, Atomic Automaton (ADW-030) // Violet, Atomic Automaton [J-Ruler] (ADW-030J), because you can use it when she tries to kill you with the Atomic Turbulence (ADW-020) and Atomic Bahamut (ADW-016) combo to reflect the damage. This way she might not go for the Bahamut play because she might kill herself otherwise. Being able to reflect any kind of damage also makes the card good. Rigveda (GRL-080) is a great card from the newest set, because it can just counter, negate effects or destroy something (or just everything together!) and that for 3 will, which you can normally pay with a stone plus the will of Carlina (TST-075) in most cases. Tea Party Before the Decisive Duel (GRL-014) is a card to draw for free, since you can get it out of the game very easily with the God’s Art of Asmodeus [J-Ruler] (TST-044J). You probably won’t be able to use the resonator part, but it’s really good for drawing a card for free. Delphinius, Whale Hero (GRL-010) is also an idea to add to the deck, although it’s a relatively expensive card for 3 will. However, as a 1000/1000 body with Flying it can be strong, and with the ability to give Barrier to every resonator with Flying, including itself, the card is a consideration worth testing. Charlotte, Chasing Light (GRL-008) can be played in order to prevent enemy resonators from recovering if you want to play some lockdown. Ayu, Multidimensional Wanderer (GRL-006) …what can I say, Ayu is one of my favorite cards XD! Regardless, Ayu can get out of control even without regalia, because since she only costs one will, she can be put into the field from your graveyard using the above-mentioned card Keep the Faith! (GOG-006). You will often be able to trigger her drawing effect for one White will, thanks to Carlina (TST-075). She’s even able to OTK, because she can get really big really fast when stacking [+1000/+1000] triggers before and after untap, and then attacking for lethal. Violet and Mariabella, Chasing Fire (GRL-024) is also a very good card, because she can block a lot of resonators very well thanks to her keyword abilities Flying and Eternal. All of her abilities can be used to good effect, for example using the first ability (recovering her for one Red will) to block two resonators from the opponent, or stacking the 2nd ability ([+200/+0]) so she can suddenly become big to prepare for an OTK. Her third ability is just very good because if you have any leftover will, you can store it for later plays when you need some extra will.

Thanks for reading and hopefully I was able to give you some insights into my deck. If you have any feedback about the deck itself or if something is still unclear, then please feel free to write a comment here on the bottom of this article and I will gladly answer them! Top 10 Cards from GoG: Revolution! || Force of Will TCG